BALTIMORE (April 11, 2014) — Planit announced today that it has been recognized for its work with PBS KIDS’ Writers Contest website as an honoree for best website in the 18th Annual Webby Awards. Hailed as the “Internet’s highest honor” by The New York Times, The Webby Awards, presented by the International Academy of Digital Arts and Sciences (IADAS), is the leading international award honoring excellence on the Internet. The IADAS—which nominates and selects The Webby Award Winners—comprises web industry experts such as media mogul Arianna Huffington, Skype CEO Tony Bates, Mozilla CEO and Chair Mitchell Baker, Instagram co-founder Kevin Systrom, mobile phone inventor Martin Cooper and creator of the GIF, Steve Wilhite. 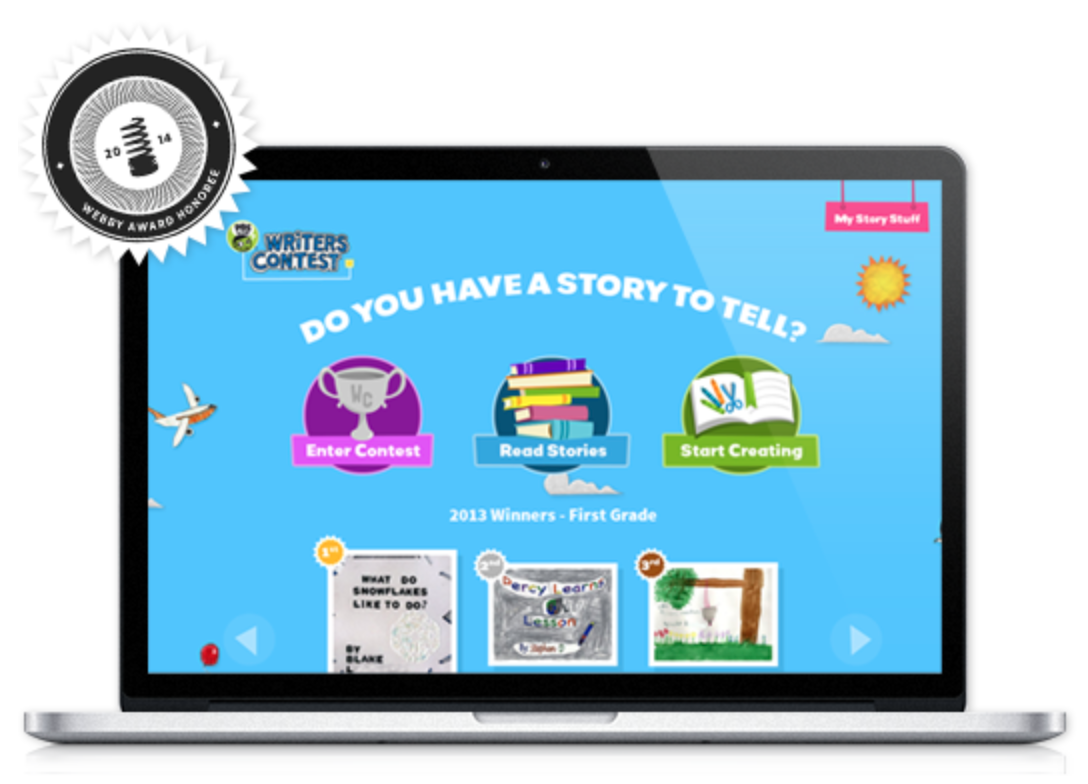 Each year kids across the country in kindergarten through third grade submit their own stories and illustrations through their local PBS stations that are then showcased on the Writers Contest website. PBS KIDS, in search of a partner to reimagine the website for the annual Writers Contest, looked to Planit as a firm that could transform the site experience into one that inspires creativity and captures the imaginative essence of the contest itself. Through innovative design solutions, the addition of an interactive Story Creations section and a series of hand-drawn illustrations for kids to incorporate into their storytelling, Planit created a way to keep kids engaged with the website year-round—even after the contest ended. “When PBS KIDS approached us to design the Writers Contest website, our team was thrilled at the opportunity to put our imaginations to work for kids across the country. And now to be named a Webby honoree for our site is an amazing distinction,” said Jess Brown, director of digital design at Planit. “Beyond the recognition, we hope this site serves as a springboard for teaching kids about community and purpose with their online interactions.” “Honorees like Planit are setting the standard for innovation and creativity on the Internet,” said David-Michel Davies, executive director of The Webby Awards. “It is an incredible achievement to be selected among the best from the 12,000 entries we received this year.” The 18th Annual Webby Awards received 12,000 entries from over 60 countries and all 50 states. Out of the 12,000 entries submitted, less than 15 percent were deemed honorees.

About The Webby Awards

Hailed as the “Internet’s highest honor” by The New York Times, The Webby Awards is the leading international award honoring excellence on the Internet, including Websites, Interactive Advertising & Media, Online Film & Video, Mobile & Apps, and Social. Established in 1996, The Webby Awards received nearly 12,000 entries from all 50 states and over 60 countries worldwide this year. The Webby Awards is presented by the International Academy of Digital Arts and Sciences (IADAS). Sponsors and Partners of The Webby Awards include: Microsoft, Dell, Vitamin T, MailChimp, Engine Yard, Funny or Die, AdAge, Percolate, Mashable, Business Insider, Internet Week New York and Guardian News and Media.