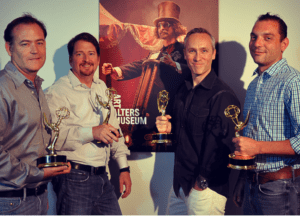 BALTIMORE (June 18, 2013) — Planit was awarded an Emmy® at the 55th Emmy® Awards Gala for its commercial campaign for The Walters Art Museum. To view the commercials, click here and here.

“For nearly two decades, Planit has been respectfully disrupting audiences on behalf of our clients and these TV spots further demonstrate our success with that,” said Matt Doud, president and co-founder of Planit. “We are thrilled to win such a prestigious award for our work with this internationally renowned institution. Our goal was to bring the curiosity, discovery and excitement that people experience when they visit The Walters Art Museum to life. Obviously the Academy thinks we succeeded,” Doud added.

The Emmy® Awards, held on Saturday, June 15, 2013, brought more than 550 nominees from Maryland, Virginia, and Washington, D.C., to the Baltimore Marriott Waterfront Hotel to recognize work in categories of production and television crafts in 2012. Awards for excellence were presented in 93 categories, with more than 700 entries submitted to the competition, which was judged by the National Capital Chesapeake Bay Chapter of The National Academy of Television Arts and Sciences

In addition to the Emmy®, Planit also won four Telly Awards for The Walters Art Museum commercials. The Telly Awards honor the best film and video productions, groundbreaking online video content and outstanding local, regional and cable TV commercials and programs. The Telly Awards Planit took home include: “A Palace Inside,” Barker Campaign and “Meow, I’m Dead” in the Not for Profit category and “Palace Inside” for the Cinematography category.