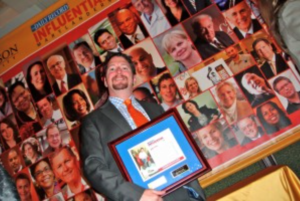 Baltimore, MD – April 22, 2010 – On the heels of taking home the top prize at the Advertising Association of Baltimore’s ADDY Awards, Matt Doud, president of Planit, has been named among The Daily Record’s Influential Marylanders for 2010. Doud was chosen as an honoree for the role he has played in the state’s impressive growth in recent years due to his prominence, activities and community involvement.

“I am honored to be named among this group of the state’s great influencers,” commented Matt Doud, president of Planit. “When in the business of innovation, ad agencies must constantly stay one step ahead. And doing this in uncertain economic times like we’ve seen over the past 18 to 24 months presents an even greater challenge. I’m thankful to have the ability to lead such a successful, creative organization like Planit. With this recognition, I look forward to continuing to invest time and resources back into Planit’s clients and the community.”

Doud, along with the other honorees, was honored at a ceremony on April 21 from 5:30 p.m. to 8:30 p.m. at the Grand Lodge in Cockeysville. Along with the other award winners, he will also be profiled in the Influential Marylander’s magazine distributed at the event and inserted in the April 23 issue of The Daily Record.

Inc. Readers Agree: Planit Is One of the World’s Coolest Offices