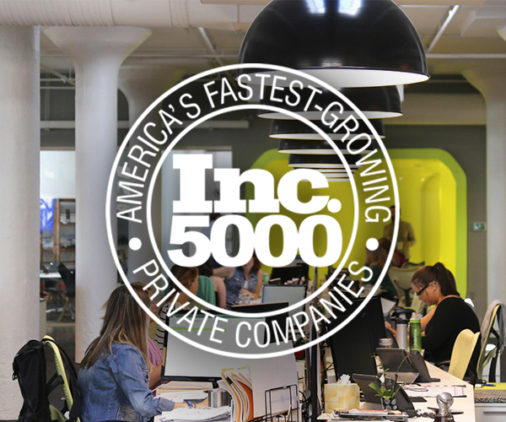 BALTIMORE (August 17, 2016) — Planit, Baltimore’s top award-winning communications, marketing and interactive agency, is pleased to announce that it has secured a spot on the 2016 Inc. 5000. This marks the 35th year Inc. magazine has put out its list of the fastest-growing private companies in the United States. Planit now holds the position of 3,055 on the esteemed list with 112 percent growth in sales over the past three years.

“Planit continues to hit our stride this year as we earn a spot on the Inc. 5000 list for a fifth year,” said Matt Doud, president of Planit. “We are honored to be recognized for maintaining tremendous growth, which is a direct result of our fearless drive and appetite for innovation—something we have been persistent in since day one.”

The Inc. 5000 is the most prestigious ranking of the nation’s fastest-growing private companies and represents a unique look at the most successful companies within the American economy’s most dynamic segment—its independent small businesses. The list is ranked according to percentage of revenue growth when comparing 2012 to 2015. To qualify, companies must have been founded and generating revenue by March 31, 2012. They had to be U.S. based, privately held, for profit, and independent—not subsidiaries or divisions of other companies—as of December 31, 2015.

“The Inc. 5000 list stands out where it really counts,” says Inc. President and Editor-In-Chief Eric Schurenberg. “It honors real achievement by a founder or a team of them. No one makes the Inc. 5000 without building something great—usually from scratch. That’s one of the hardest things to do in business, as every company founder knows. But without it, free enterprise fails.”

Planit, holding the 3,055th spot on the Inc. 5000, joins the ranks of powerhouses on the 2016 list such as Pandora, LinkedIn, Yelp, and Zillow. Complete results of the Inc. 500/5000, including company profiles and an interactive database that can be sorted by industry, region, and other criteria, can be found at www.inc.com/inc5000.

The annual Inc. 5000 event honoring all the companies on the list will be held October 18 to October 20, 2016, in San Antonio, TX. Speakers will include some of the greatest entrepreneurs of this and past generations, such as best-selling author and strategist Tony Robbins, SoulCycle co-founders Elizabeth Cutler and Julie Rice, Cornerstone OnDemand founder, president and CEO Adam Miller, Marvel Technology Group director and co-founder Weili Dai, and New Belgium Brewing co-founder and executive chair Kim Jordan.

The Power of Influencer Marketing

For the Third Year, Planit Among ICIC and Fortune’s Inner City 100 Winners
View All Articles